The Shire of Yilgarn is 30,720 square kilometres in area and has a population of 1,202 (ABS, 2016 Census). Yilgarn is known by many as the Gateway to the Wheatbelt and the Goldfields.

The name “Yilgarn” is aboriginal for “white stone” or “quartz”.

Southern Cross is the major town centre of the Shire of Yilgarn and is located 370km east of Perth along the Great Eastern Highway. Other townsites in the Shire include Bodallin, Bullfinch, Ghooli, Koolyanobbing, Marvel Loch, Moorine Rock and Yellowdine.

The two major industries in the area are mining and agriculture. Gold, salt, lithium and iron ore are mined, while grain, sheep, cattle and pigs are the focus of the agricultural industry. 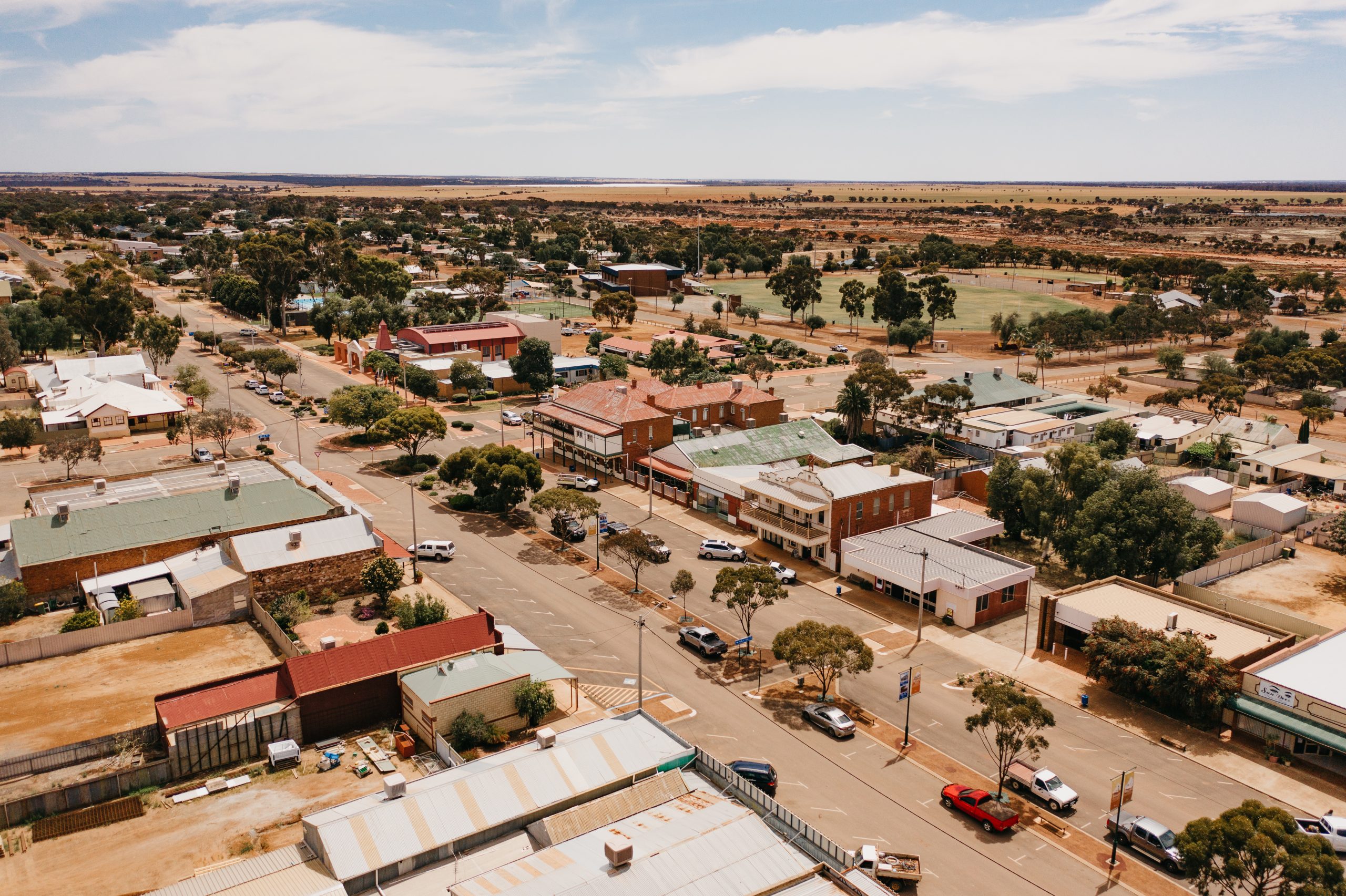 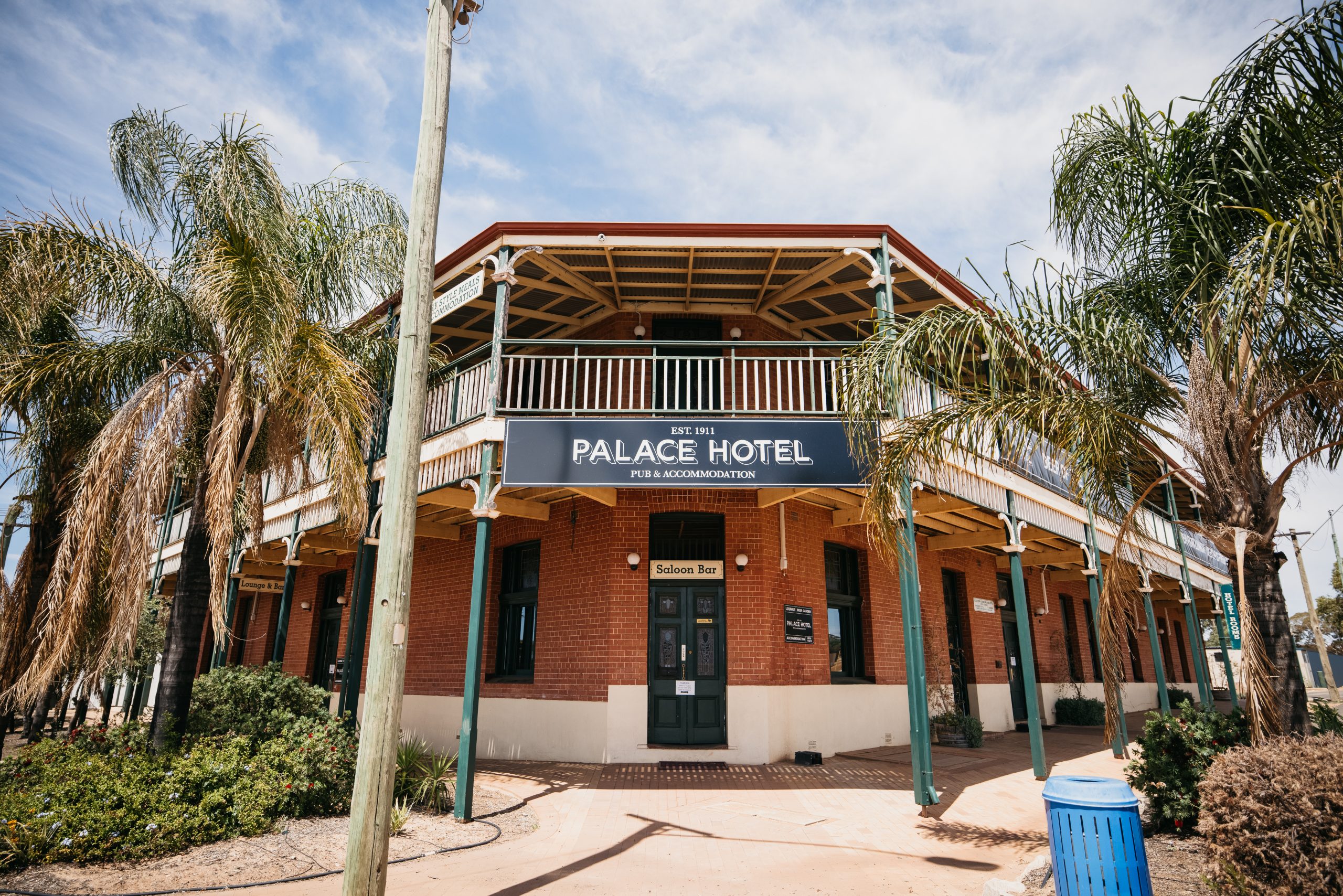 The first major gold discovery in the Eastern Goldfields region occurred at Southern Cross. It predates the larger towns to the east and therefore has a special relationship with Coolgardie and Kalgoorlie, being referred to as the mother town of Coolgardie and the grandmother of Kalgoorlie.

The town of Southern Cross owes a lot to Tom Riseley and Mick Toomey whose discoveries of gold in 1887-88 established the area as an important goldfield. Riseley and Toomey named the area after the Southern Cross, the constellation they used to help them navigate their way when travelling at night.

Further discoveries occurred in and around the region and the town grew rapidly. Southern Cross became a gazetted frontier town in 1890 and established the first regional courthouse in 1891. By 1893 Southern Cross had become a municipality and in 1894 the railway arrived from Perth linking the town to the coast.

The town became an important administrative base as the frontiers of the eastern goldfields were developed and played a crucial role in the supply of provisions for the thousands of people and animals that came through the area.
When A.W. Bayley rode into Southern Cross with 554 oz of alluvial gold, which he had found at Fly Flat (now Coolgardie), the miners who were working the hard Southern Cross reef gold literally disappeared overnight and moved to the more lucrative eastern fields.

The famous water pipeline engineered by C.Y. O’Connor commenced in 1898, reaching Southern Cross and eventually Kalgoorlie in 1903. This provided relief from the dependence on water being brought via rail and/or camel train from Perth. This also allowed the government to start various farm settlement schemes, securing the region as a pastoral district. 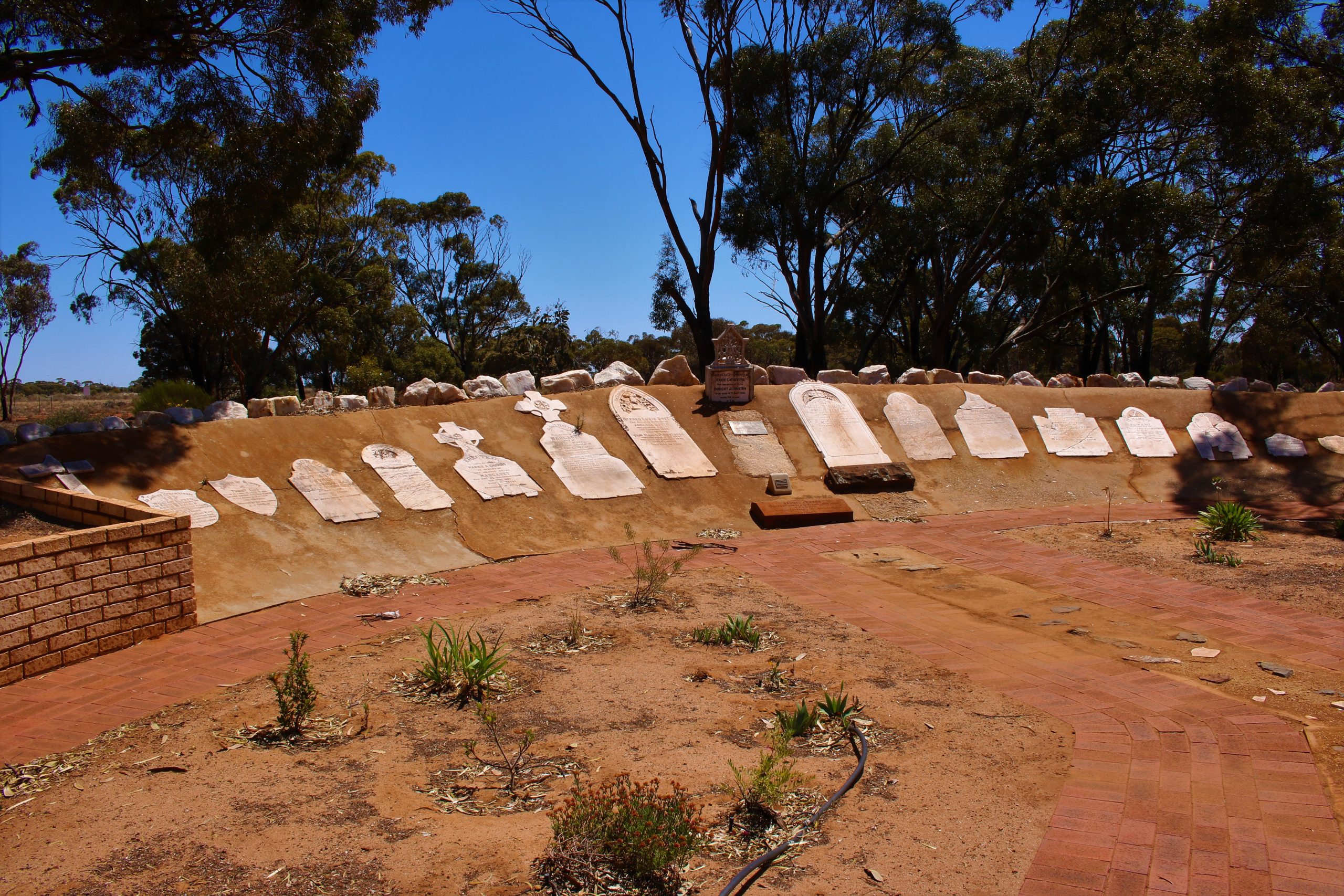 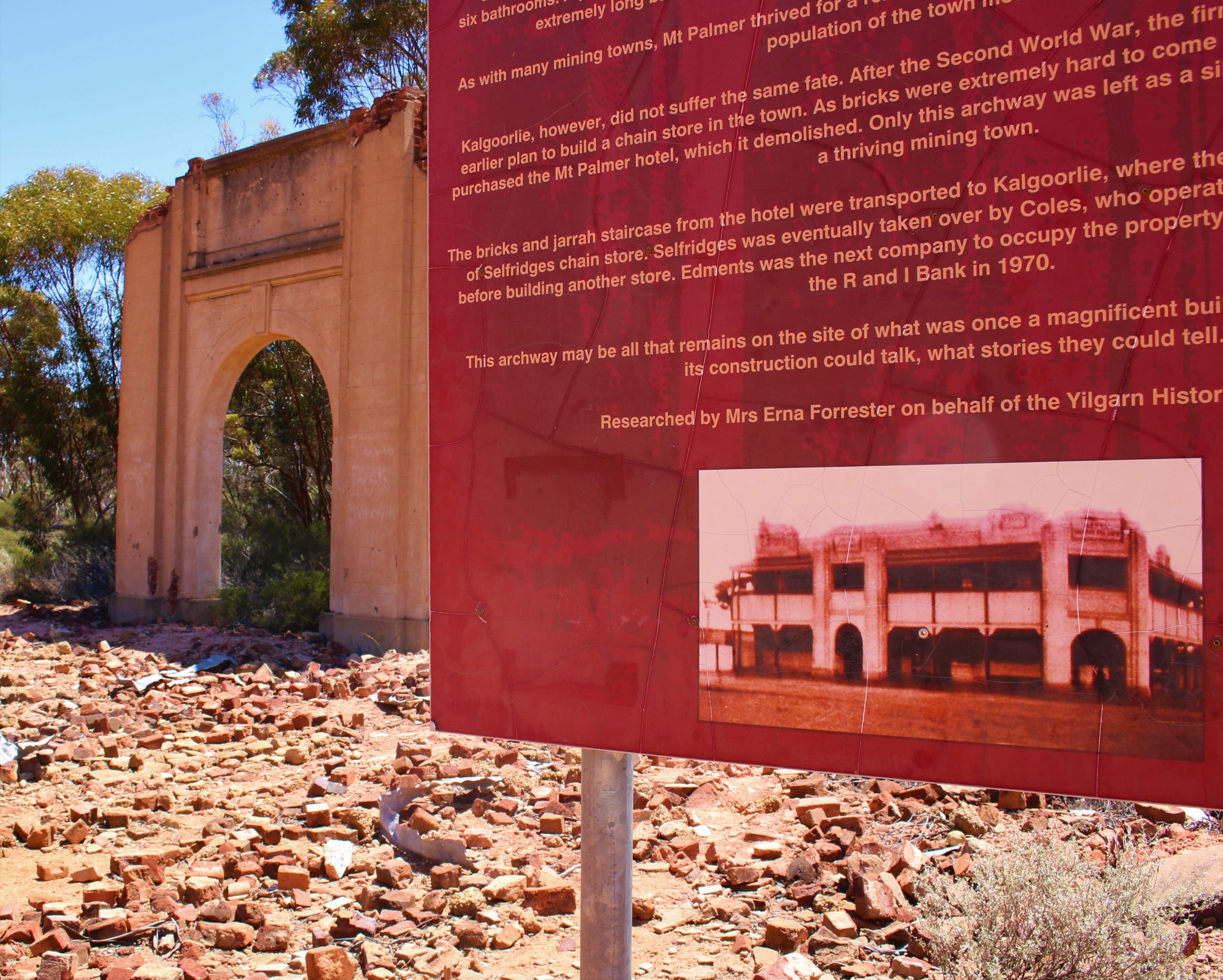 Mining is the largest output generating sector, with an estimated annual output of $1.015 billion

Mining is the largest industry of employment, supporting an estimated 686 jobs 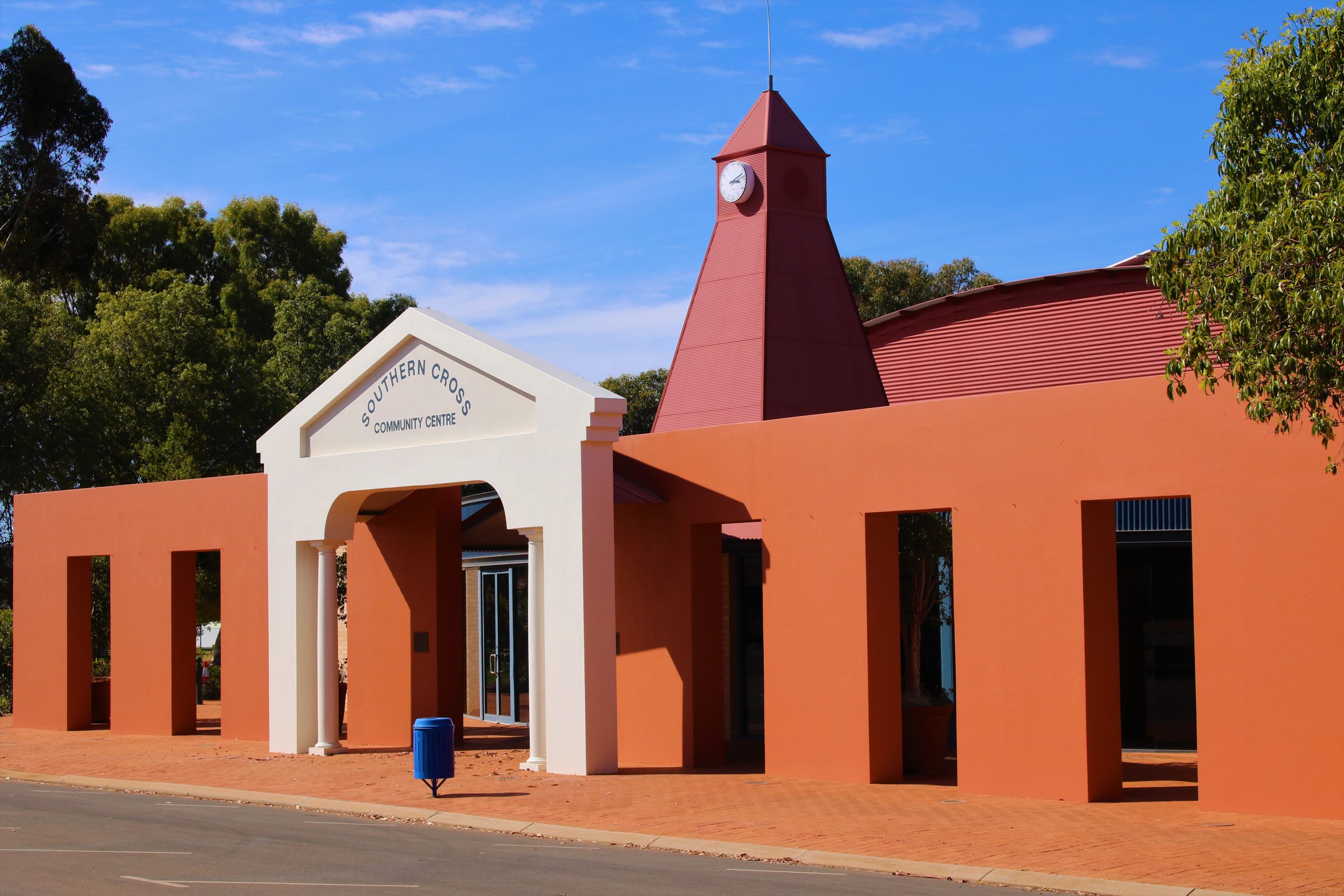 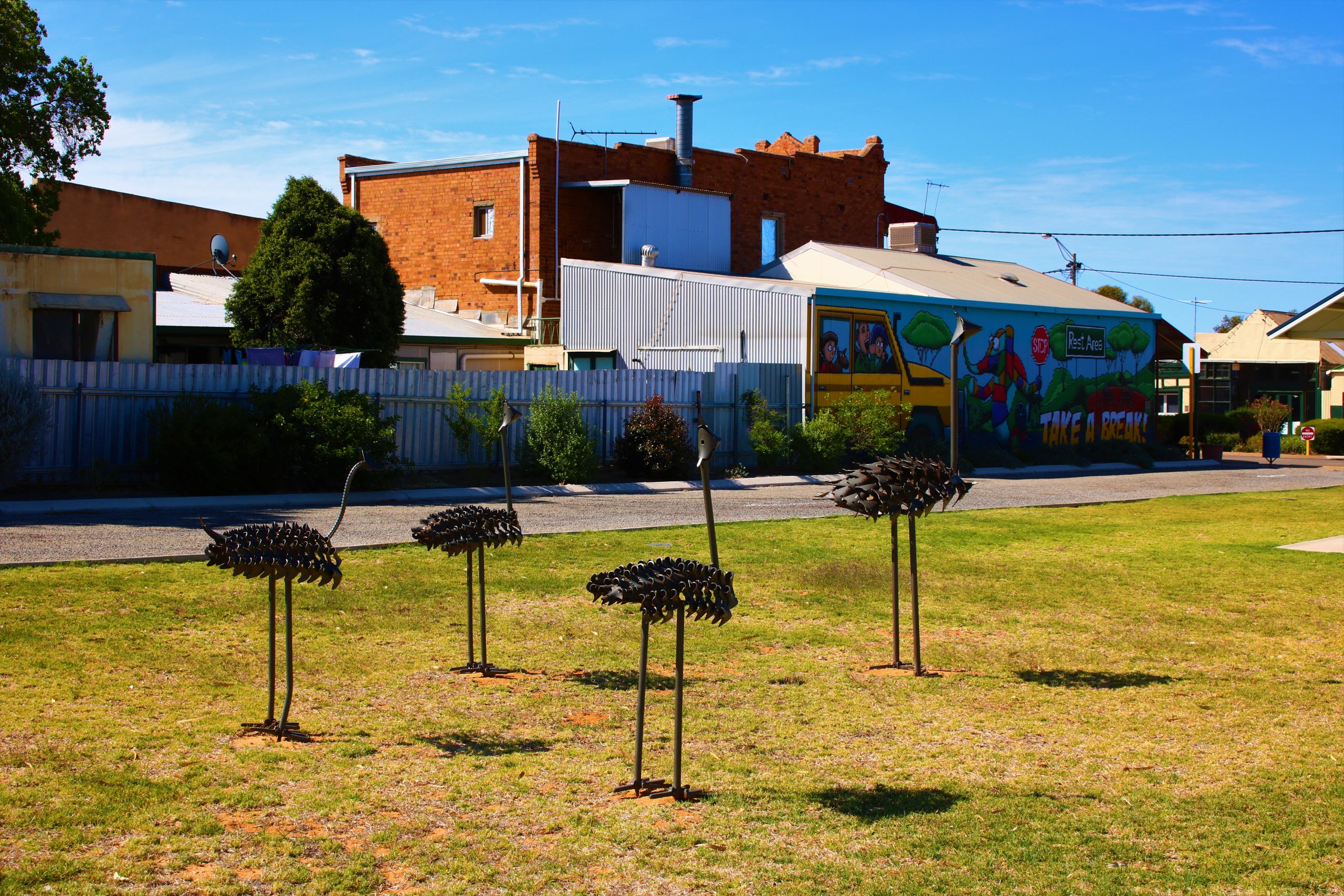 Situated in the Yilgarn Shire 25km south east off the Great Eastern Highway from Parker Rd out from Moorine Rock, Frog Rock is a popular picnic spot. A small dam is located beneath a wave rock formation. There is a fine stand of gimlet on the road into the site and wildflowers abound in the spring. 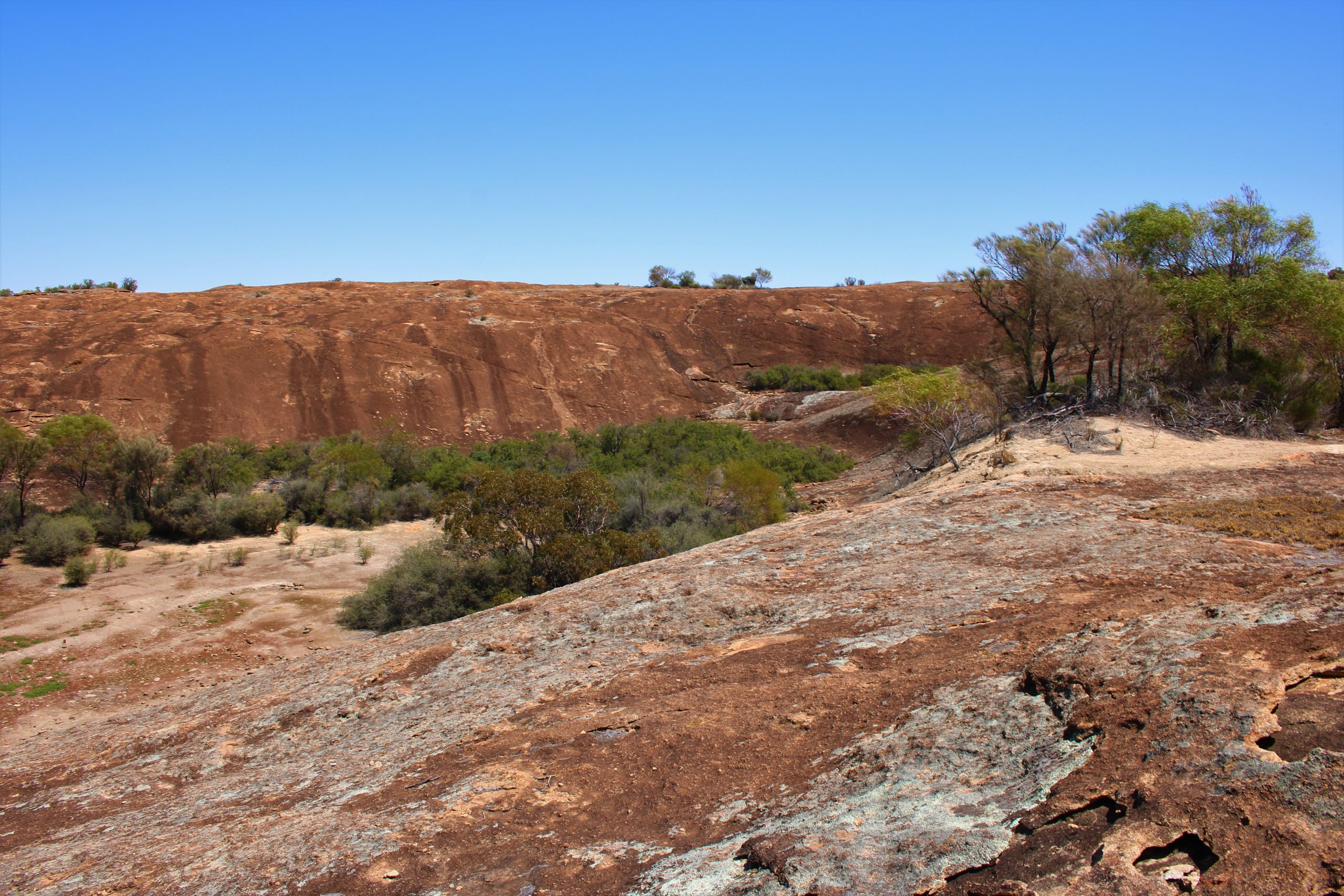 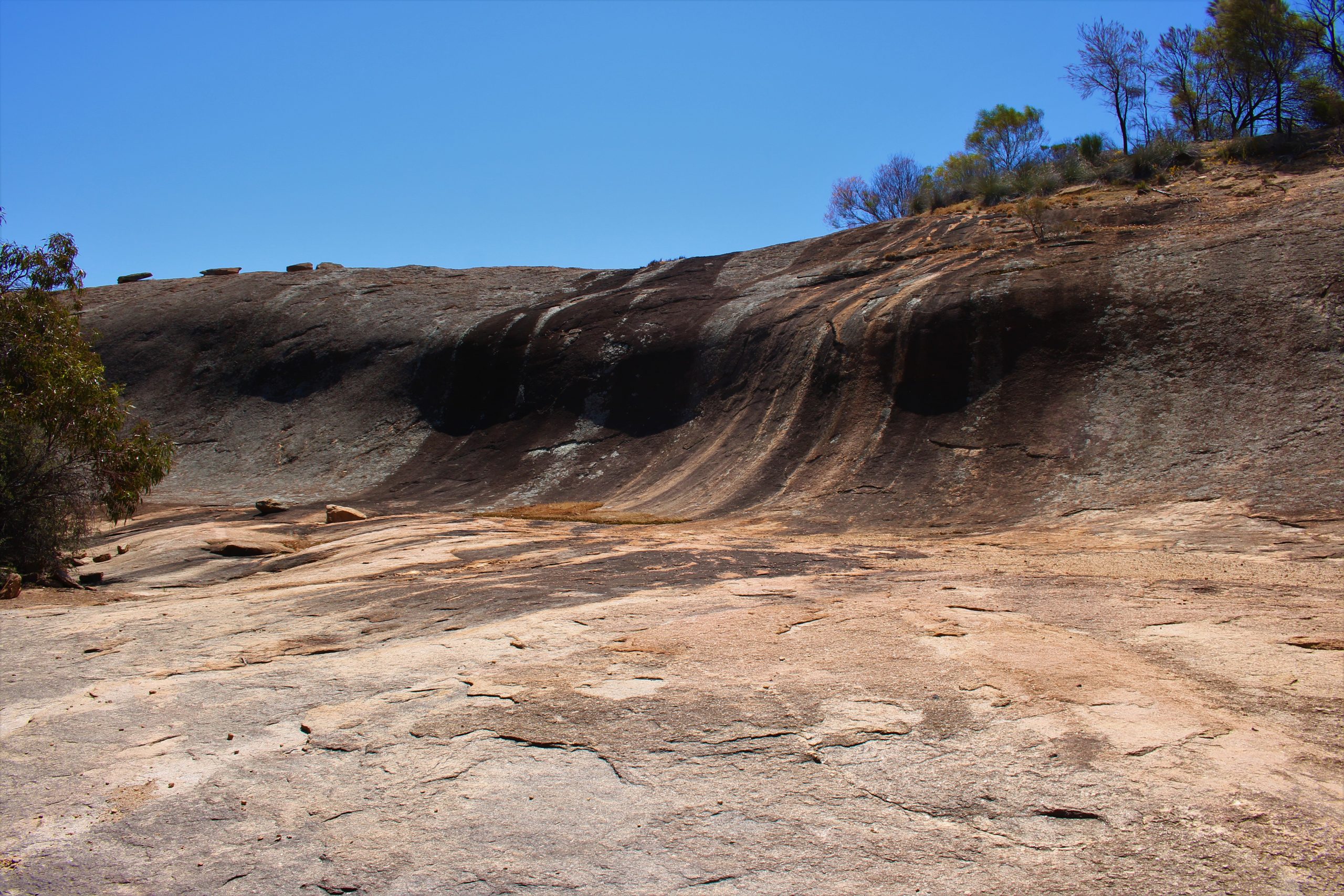 Named not from gold but from the “Golden Scrub Wattle” which covers the slopes of the valley. Township of Knutsford – this is where it began in 1887 with the find of gold reef, paving the way to Southern Cross and other finds within the Yilgarn.

Government Dam is on the Bullfinch Road adjacent to the turn off for Hunts Soak. The discovery of gold set off a chain reaction which in space of 2 years placed the Public Works Department under extreme pressure to provide even the most basic water supplies to the area. Hunts Soaks were not enough with an ever-expanding population. Along with the rapid development of the eastern railway it was also necessary to establish a good water supply for the locomotives.

In this area, constructed in a rock out crop with natural catchment, is one such basic water supply. As well as the railway’s use it supplemented water for stock, horses and men during the boom years. It still contains water today.

As wells were established along what became known as Hunts Track, later called the Old York Road, these watering holes signposted the way to the future of the Eastern Goldfields. Hunt located a number of aboriginal water holes and native springs.

Karalee Dam was constructed to provide water for slow steam trains en route to Kalgoorlie. The site was chosen mainly because of the granite outcrop; with rain the outcrop becomes a natural catchment area. Constructed between 1896–1897, its capacity is 10.6 million gallons, 1487 feet above sea level and is 25 feet in depth. Retaining walls of granite slab, all cut from the top of the rock and laid by hand, surround the enormous rock catchment.

This enables the water to flow off the rock into the dam via a large semi-circular aqueduct of steel, hand riveted at each joint, which is still in very good condition considering its age and the natural harsh elements. To reflect upon the unbelievable manual labour and horsepower involved in this construction, is well worth the journey. 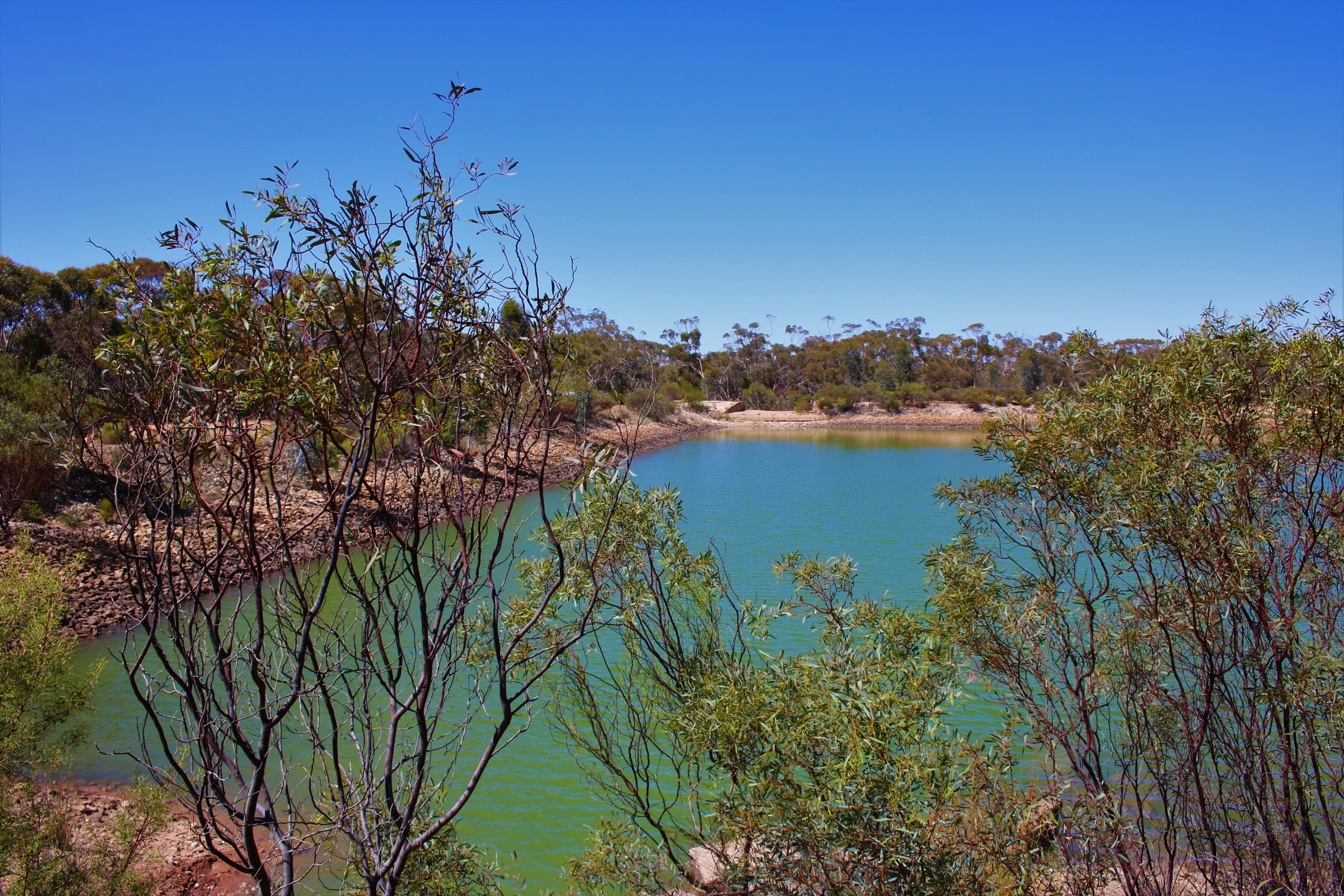 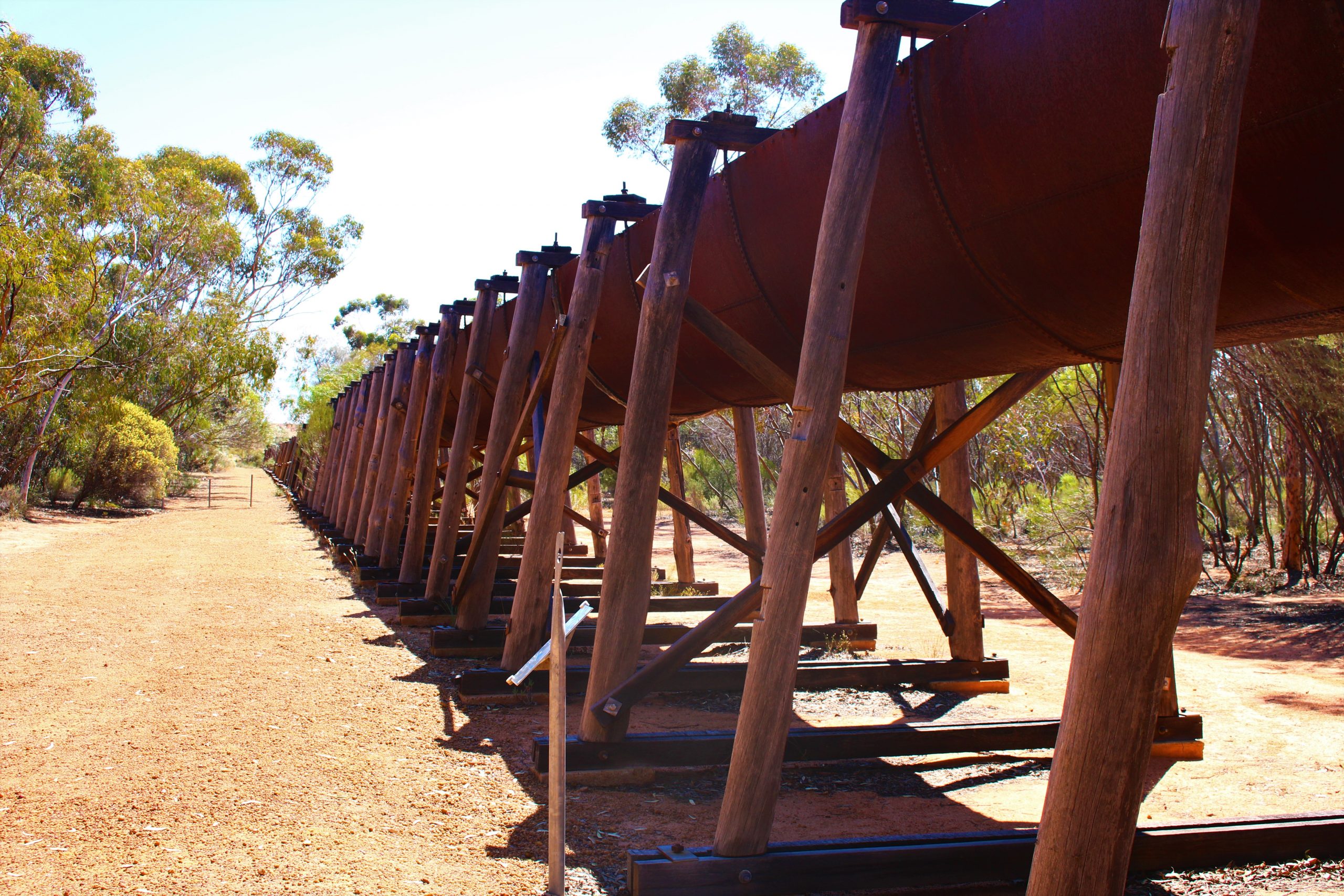 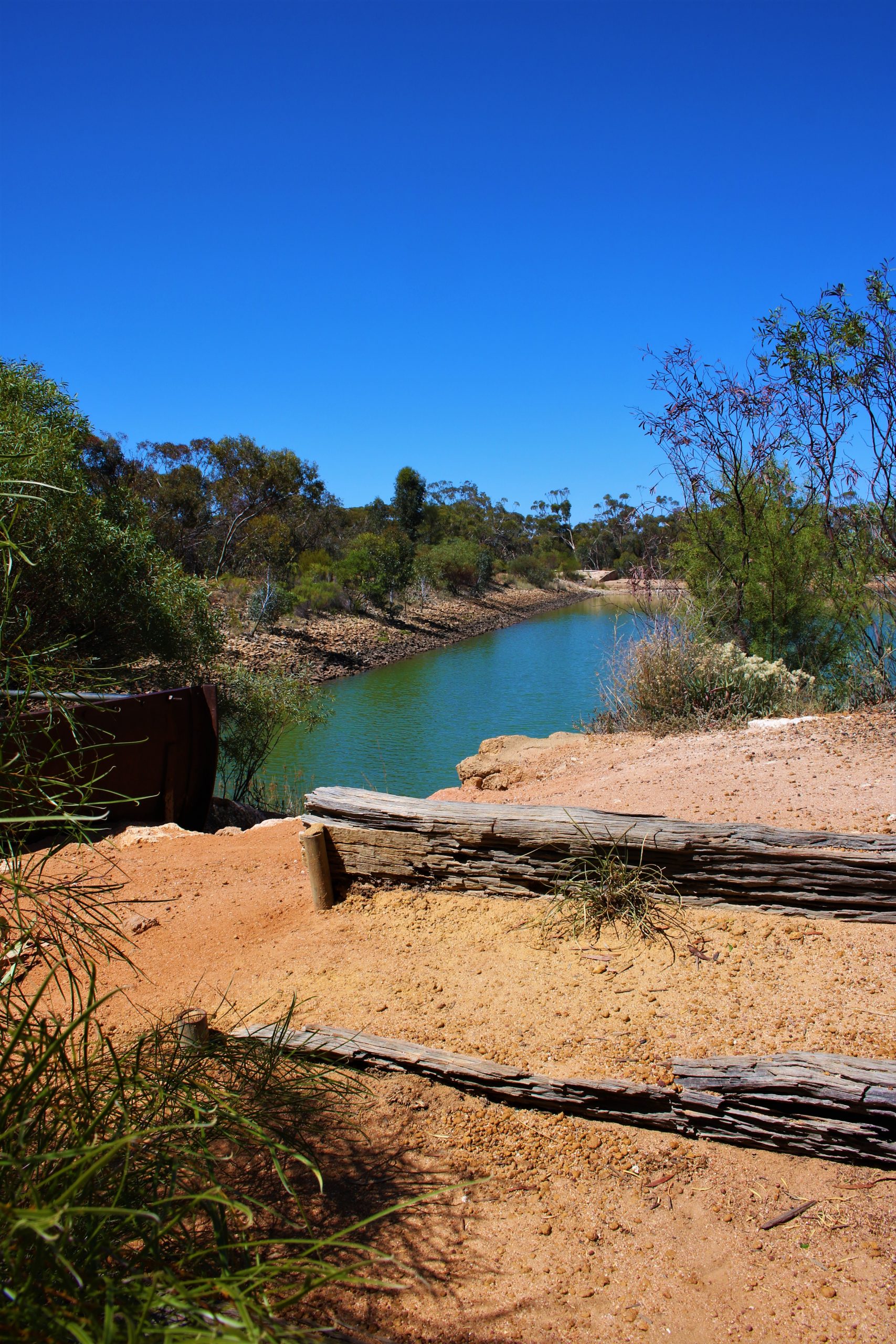 Aboriginal for meat (Koorkoor) and place of (dine). Due to the water and wind erosion over the years some very interesting miniature caves, cliffs and bays are to be discovered.

On the Bullfinch Road, just north of the lake, you can identify the quarry site, used to supply foundations for a proposed air training school. The school never eventuated. However, $60,000 worth of engine bed foundations in the middle of a wheat field adjacent to Southern Cross are the remaining proof of the unfinished project. 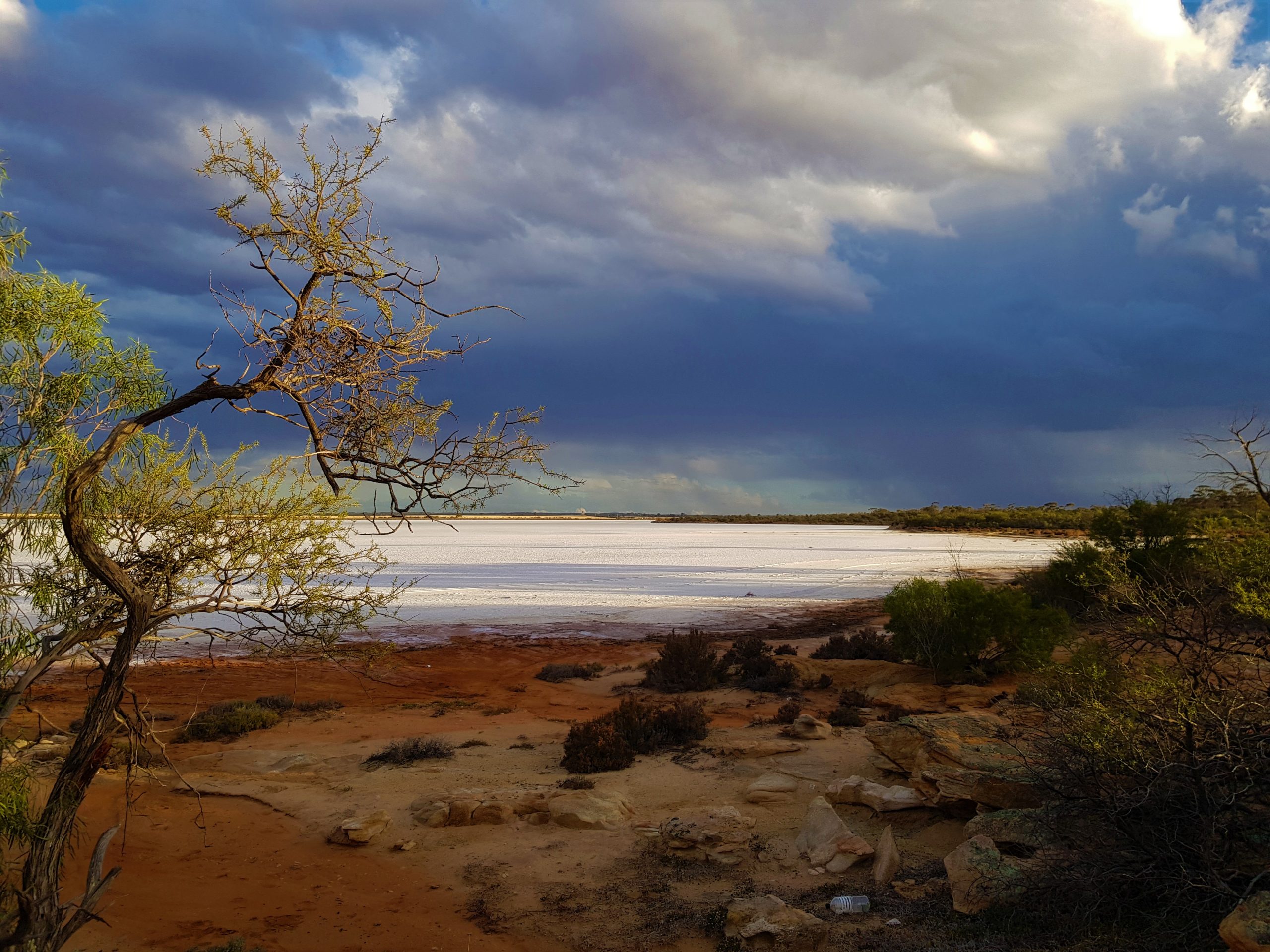 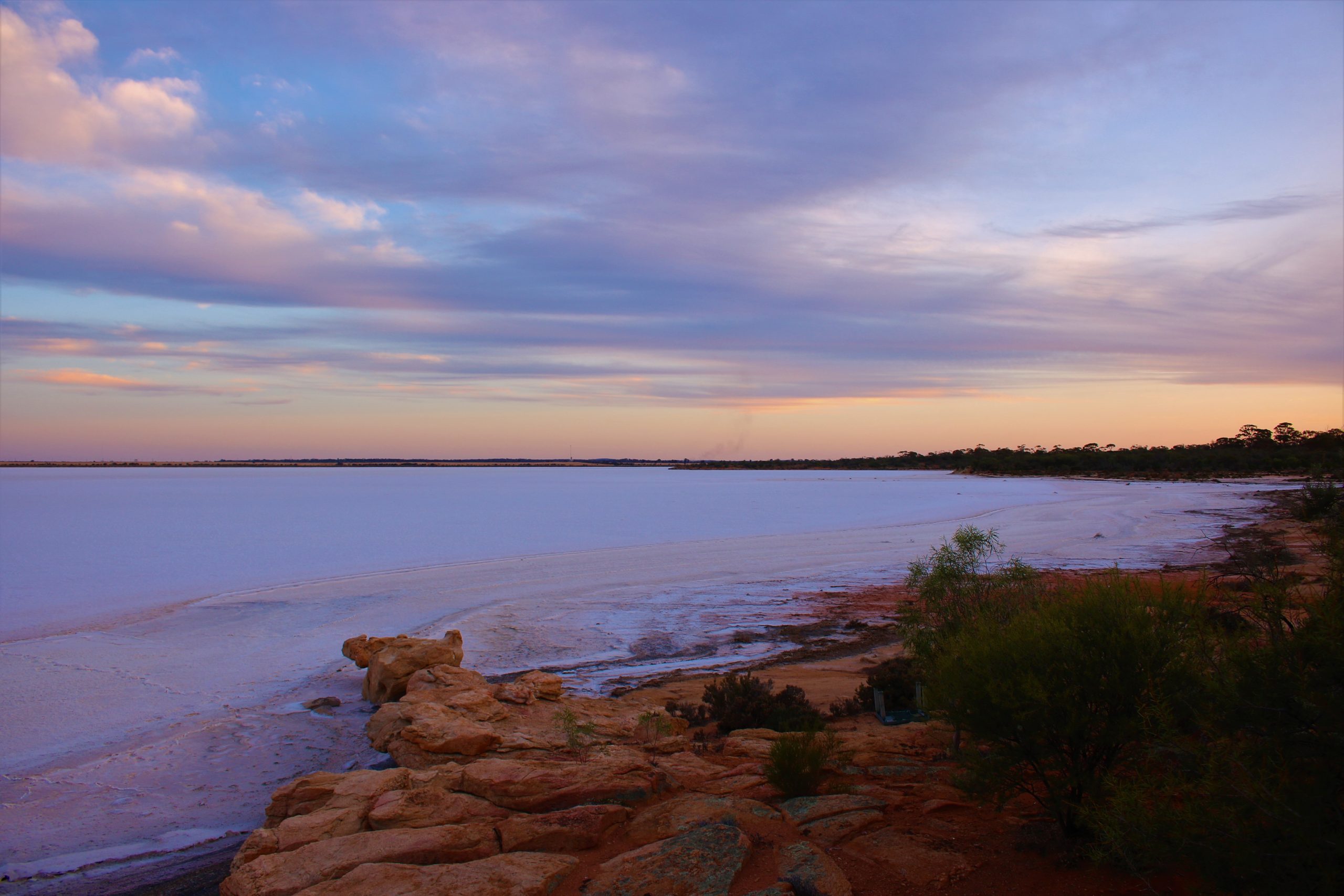 Water, or lack of it was the curse of early Southern Cross. Between 1888 & 1894 the only source of water to service an ever expanding town was obtained from rock holes, soaks, what ran off the houses or from the condensers around the lake.

As the railway reached Southern Cross in 1894, water was carted via rail from Northam some 260kms to the west, this was meant to be a temporary measure. As the population swelled the government considered it necessary for a large dam to be built. This led to the New Zealand Gully Dam site being selected, due to the considered good run off from the hills alongside.

In 1903 the goldfields pipeline reached Southern Cross (a great ceremony was conducted with the turning on of the first water tap).

On the 27th August 1944, a RAAF Vultee Vengeance dive bomber went missing on a training flight from Pearce near Perth. The plane had apparently become lost and run out of fuel.
A ground search was undertaken by the RAAF and the pilot was located four days later at a remote farmhouse having survived by eating goanna. The wreckage was finally discovered 6 days after the crash buried ten feet into the ground and strewn over 10 acres of thick scrub. The navigator, FLT SGT CL King was never found.
A plaque has been placed to mark the sight of the crash.
For more information about this amazing story contact the Shire of Yilgarn to purchase “Vengeance of the Outback”, a book written by Charles Page.

Featuring a large cement monument with a pick and shovel to represent the early mining settlers in the district, and a scythe and rake depicting the farming industry in the Yilgarn. Visit this high spot to get an overlooking view of the Southern Cross town site. 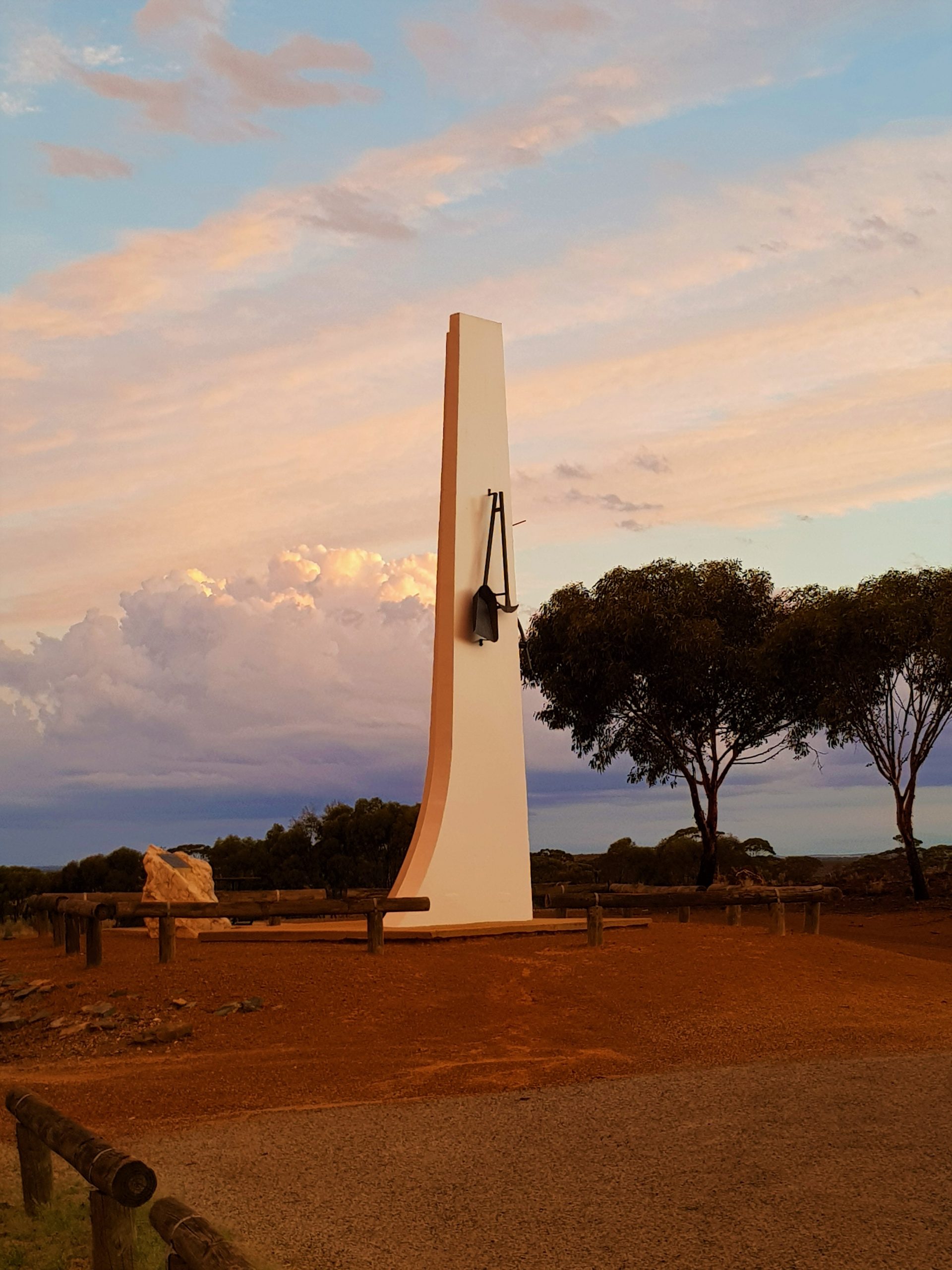 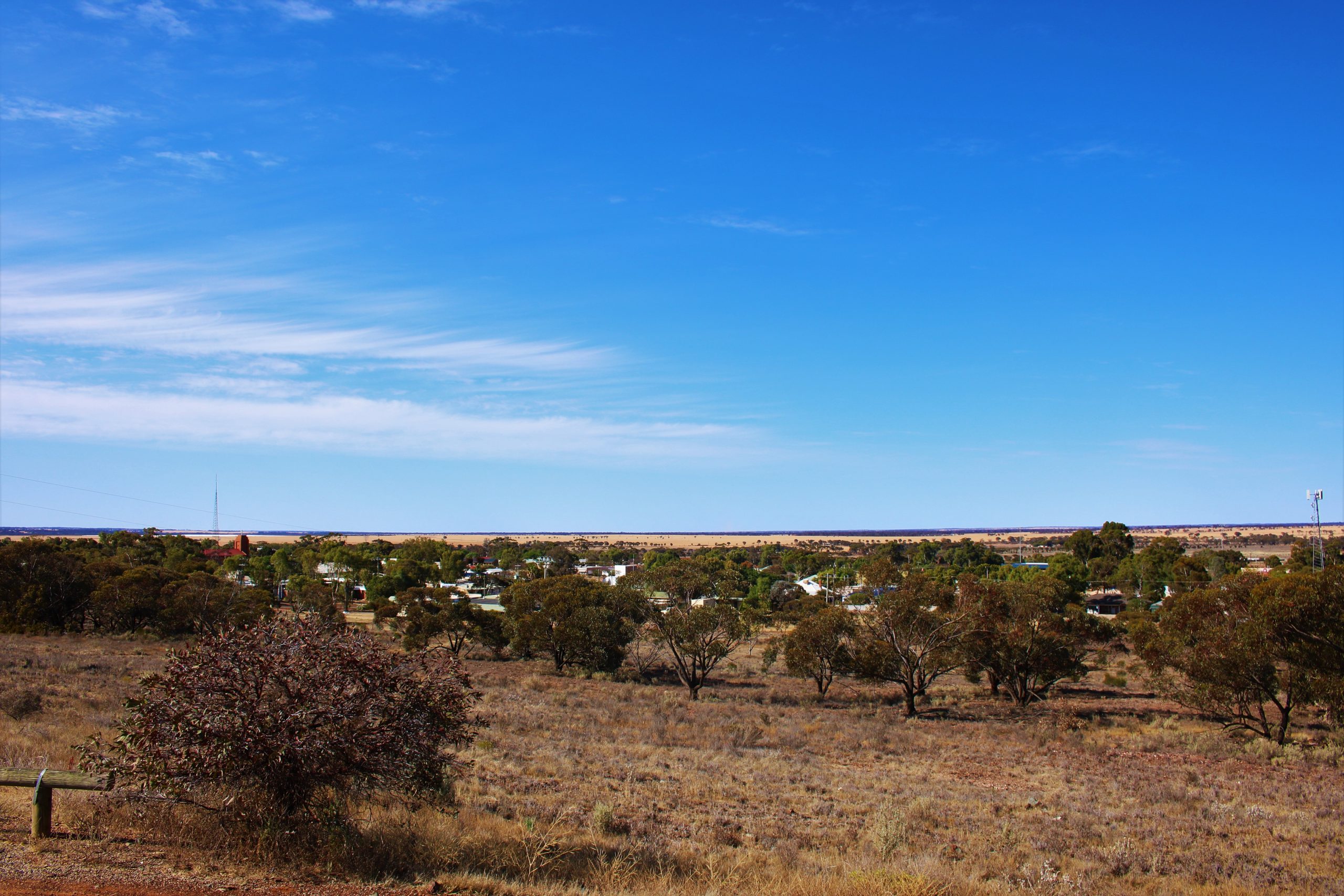 Visit the earliest Registrar’s Office and courthouse in Western Australia , now the Museum, built in 1892.

Southern Cross, standing as it does, where the Agricultural areas meet the Mining regions, is in a unique position, and its History Museum contains a collection of artefacts, records and memorabilia from both areas. 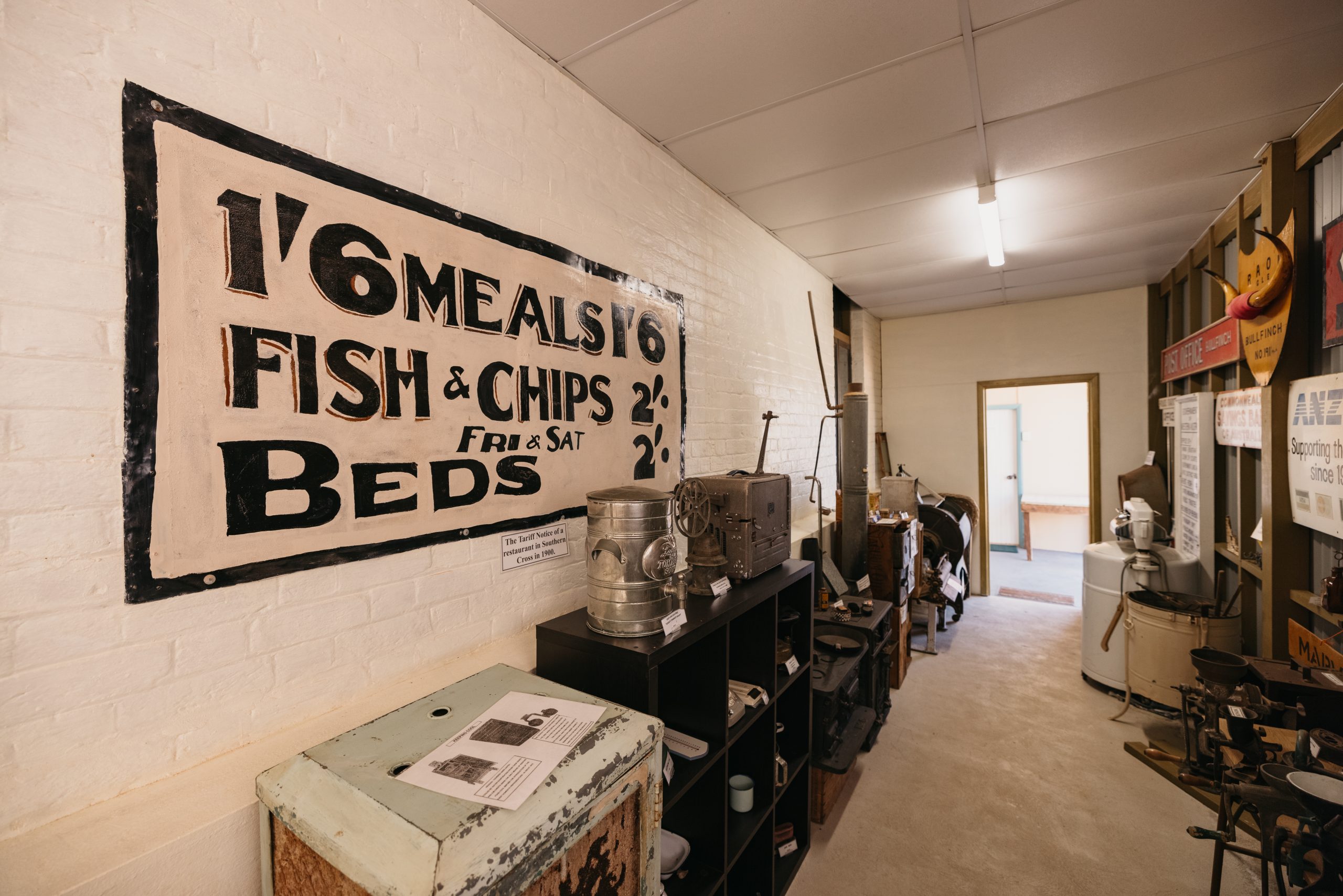 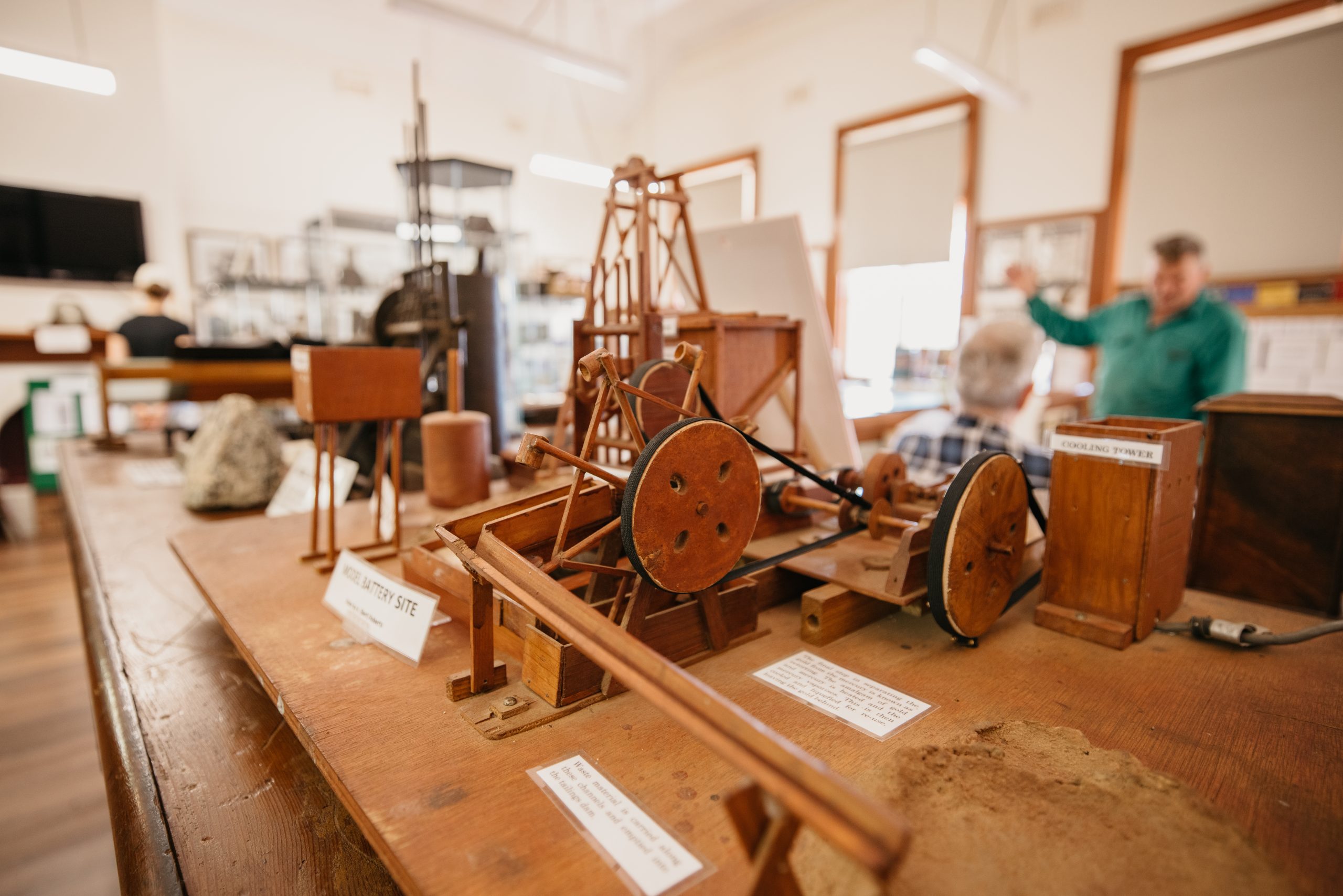 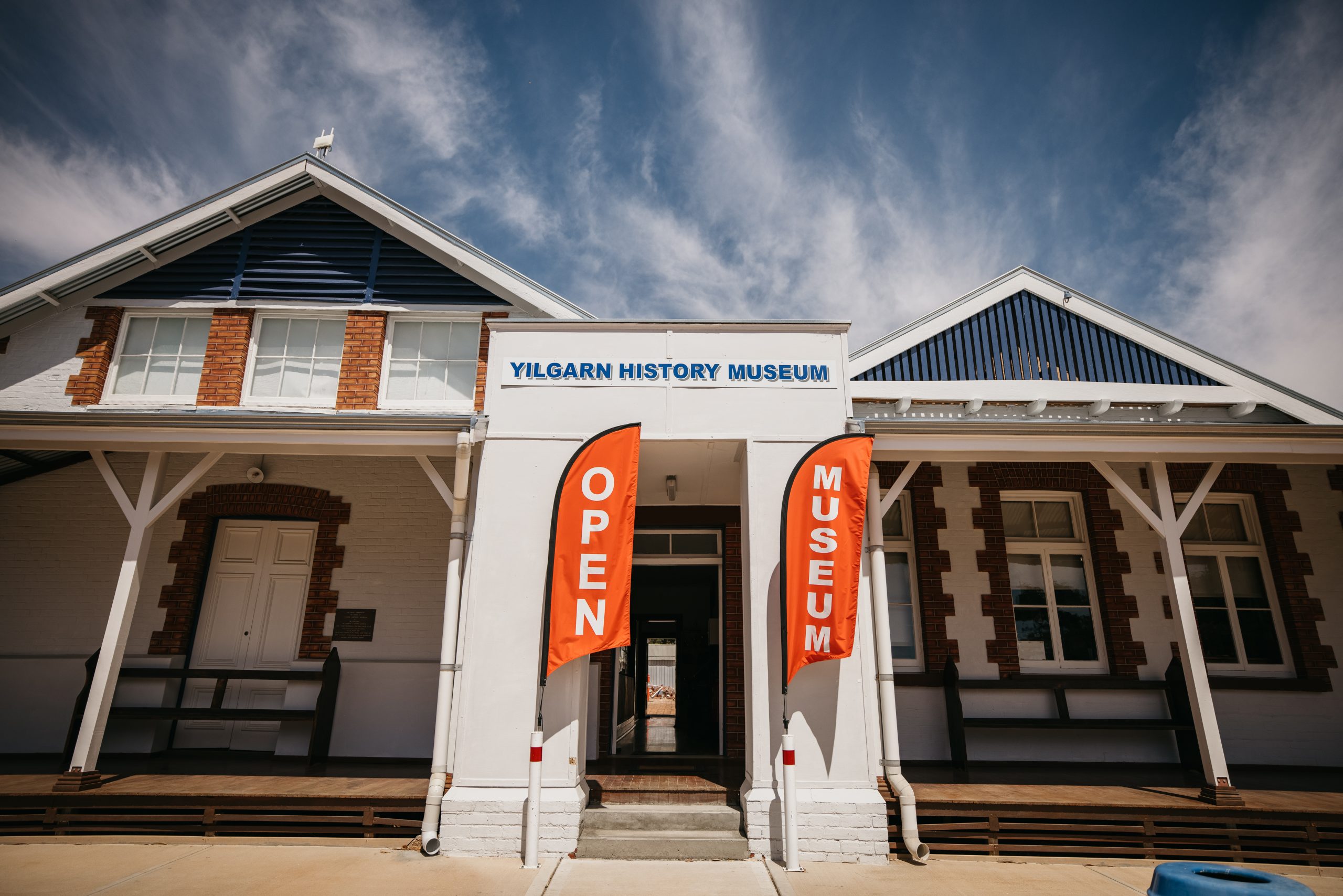 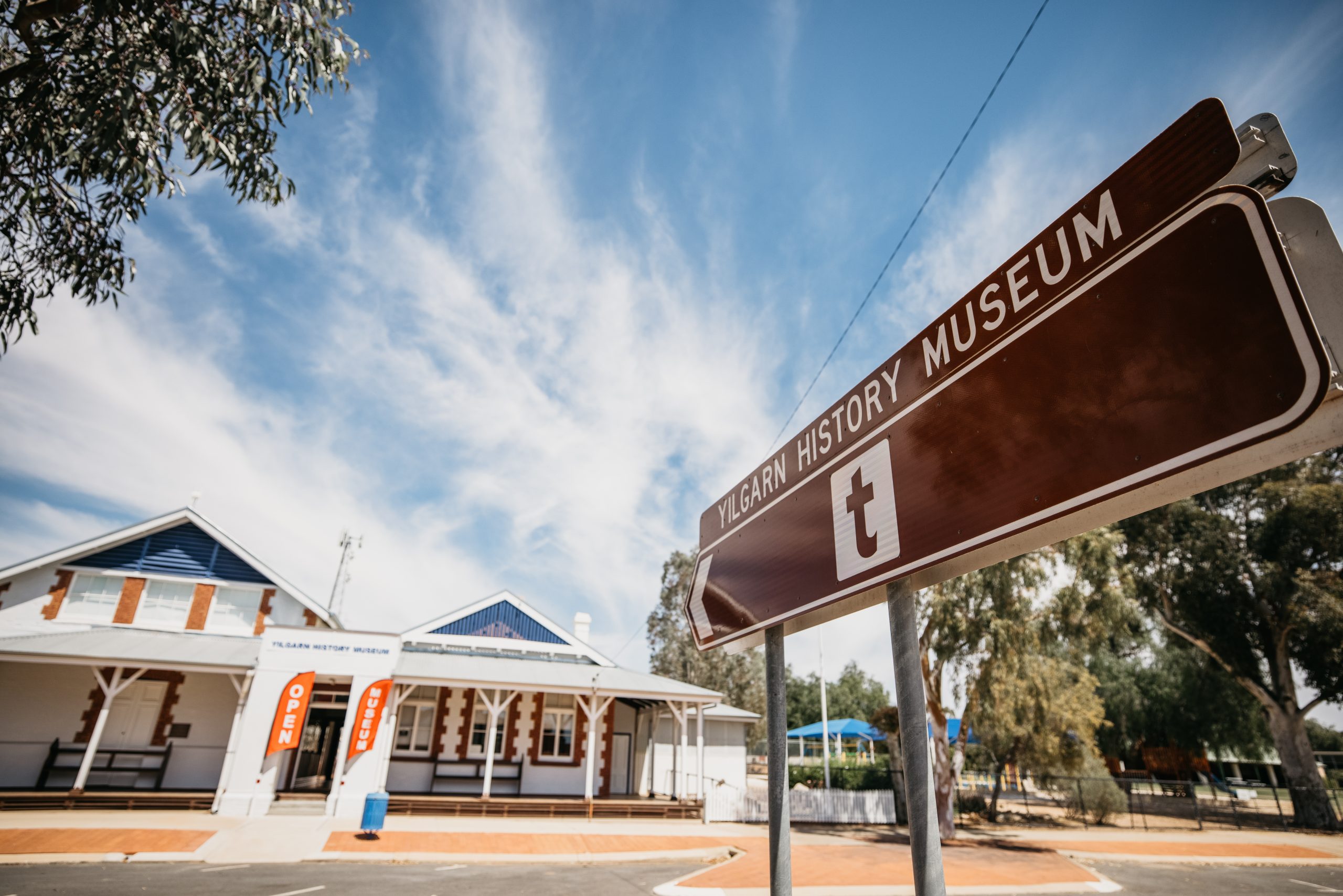 For more information about what there is to see and do, and where to stay in the Shire of Yilgarn visit:

Connect with the Shire of Yilgarn 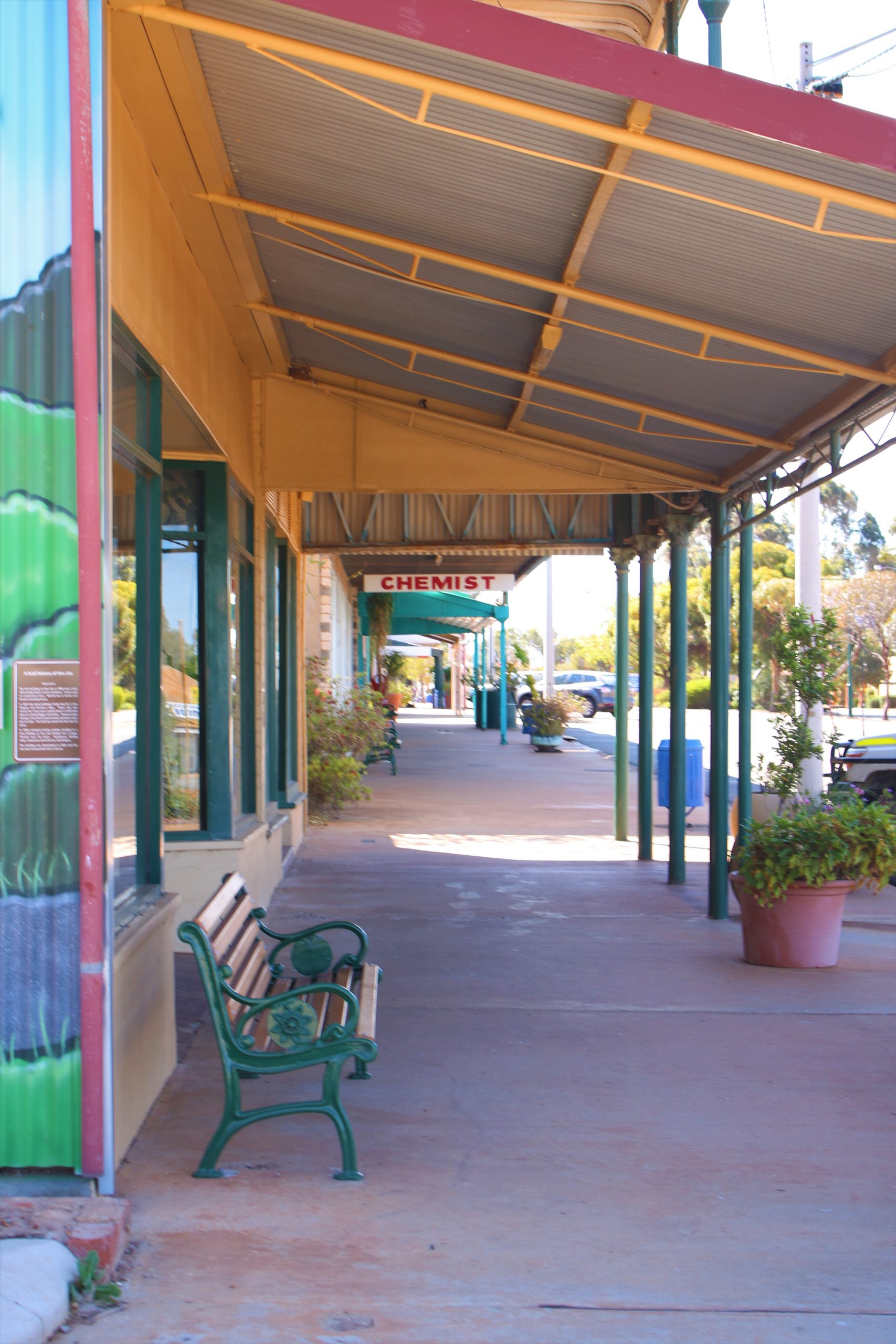 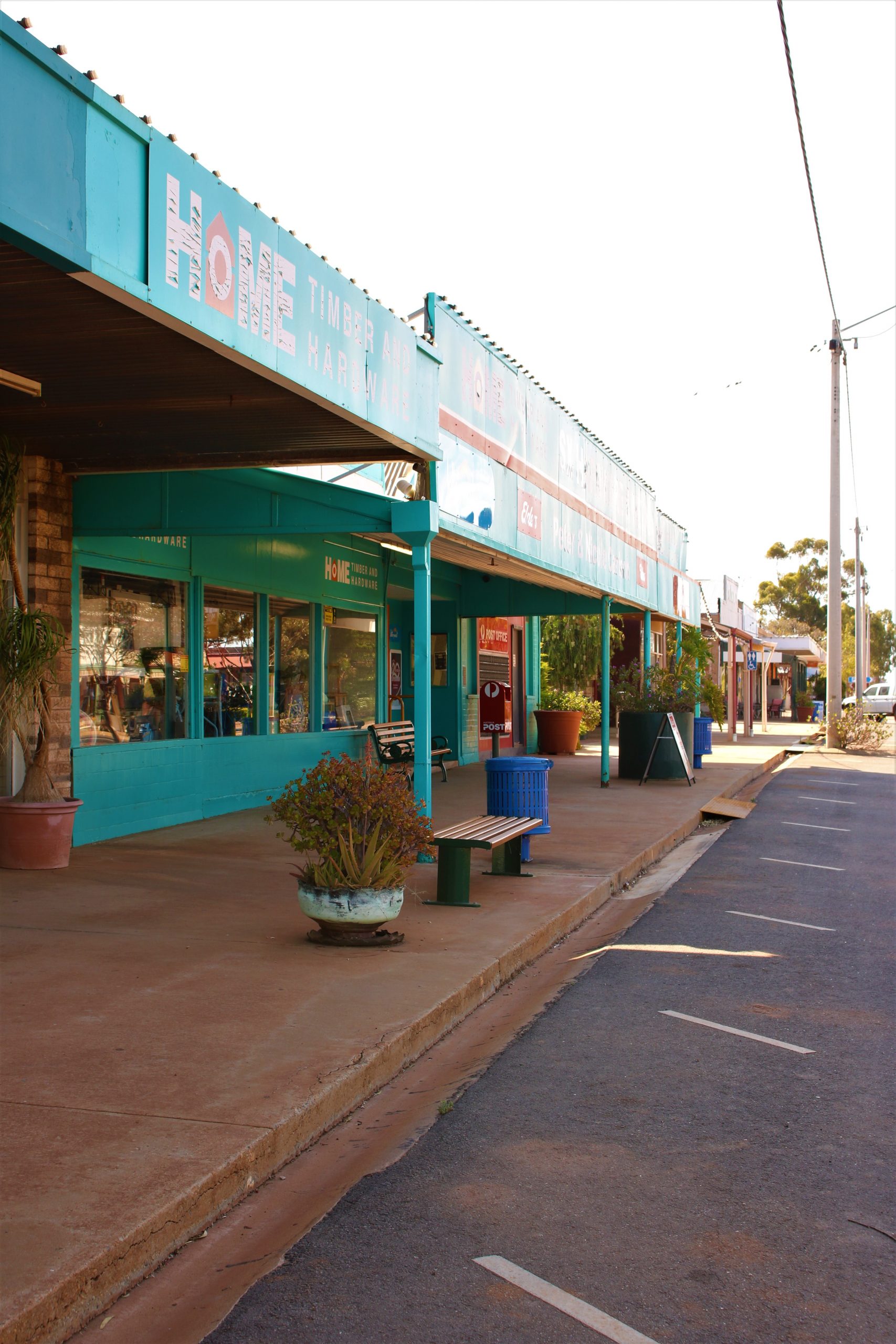